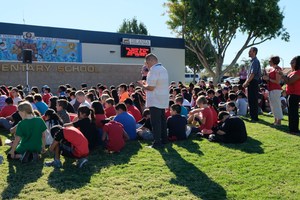 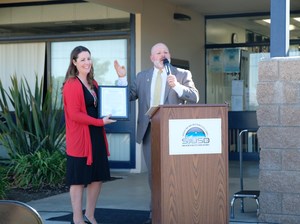 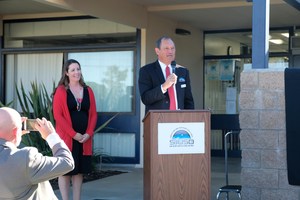 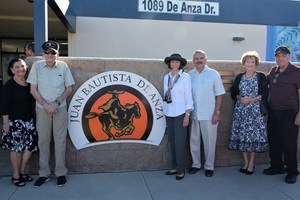 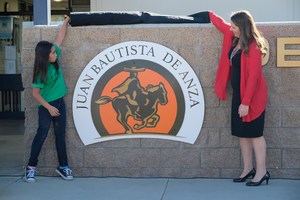 Fourth and fifth grade students, staff and guests gathered in the front lawn at San Jacinto Unified School District’s De Anza Elementary on Tuesday, October 24, 2017, to see the unveiling of a new emblem on the wall near the front entrance, commemorating the school’s namesake during the inaugural San Jacinto Heritage Month of October.

The district’s Board of Trustees took action on September 13, 2016, updating the elementary school’s name to Juan Bautista De Anza to give proper recognition and ensure his contributions to the history of San Jacinto valley are alive.

“The emphasis of Heritage Month is to celebrate the rich heritage of San Jacinto and share historical facts and highlight events and persons that shaped our community,” explained John I. Norman, SJUSD’s Board President.  “Like many of our schools, De Anza Elementary was named after a historic person, and we want to ensure the kids know why,” Norman continued.

The new emblem, created by San Jacinto High School Alumni Michael Frazer, features a Spanish rider on horseback, illustrating the famous explorer Juan Bautista De Anza who made a trail from New Mexico to San Jose, California, discovering the San Jacinto Valley in his route to the Colorado River and across the desert.  De Anza Student Sky Diddock, the first-place winner in an essay contest held for 4th and 5th graders for San Jacinto Heritage Month, recited her story during the emblem unveiling, sharing the facts about the explorer.  Sky was recognized at the San Jacinto Heritage Festival held at the Estudilllo Mansion on Saturday, October 21, with a medal and a bicycle.

Special guests at the emblem unveiling included descendants of Juan Bautista de Anza: Janice Zinnicker, Bill Freeman and Susan Felix, all three accompanied by their spouses.  These descendants have helped the National Park Service and Heritage Trails Foundation with family history and photos, and are members of the Juan Bautista de Anza Society.  Many years ago, Zinnicker and Freeman participated in a trail re-enactment relay by jogging the five-mile stretch of Bautista Road near Hemet. Zinnicker’s father posed for the sculptor that created the statue of the famous explorer that still stands today in Newman Park in Riverside, California.

City of San Jacinto Mayor Scott Miller presented Principal Lauren Armijo with a proclamation recognizing Juan Bautista De Anza Elementary, and told the student audience, “You are witnessing history today with the renaming of this school and the addition of this new emblem.  It will be up to you to share this event with other students that follow,” noted Miller.

The entire ceremony was captured as a LiveStream video on the district’s Facebook account, simultaneously shown to the remaining students gathered in the Multi-Purpose Room.  All students received a special cookie at the end of the day, featuring an edible emblem image in its center.

The City of San Jacinto, along with San Jacinto Unified and the Soboba Tribal Council proclaimed October as San Jacinto Heritage Month.  Just before October 1, light pole banners were installed in the downtown area for each of these three organizations, which also depict their individual date of establishment.  The last few celebratory events scheduled for October include San Jacinto High School’s homecoming parade and football game on Friday, 1:00 p.m. and 7:00 p.m., respectively.  During the football game vs. Tahquitz High School, tribute will be given to the Soboba Band of Luiseño Indians for their contributions to the community and education programs.