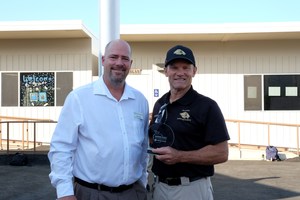 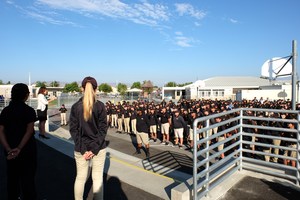 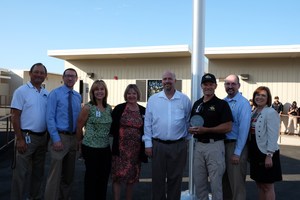 The school’s staff and student body was presented with a special plaque and certificate by Field Marketing Manager Chris Renn at the SJLA campus, with SJUSD Board of Trustees, Superintendent and cabinet on hand to add congratulations.

San Jacinto Leadership Academy, which is a magnet school in San Jacinto Unified, is among 275 middle and high schools across California cited for embracing and implementing rigorous academic standards while creating a positive school environment that promotes excellence and creativity in teaching.  State Superintendent of Public Instruction Tom Torlakson said that the Gold Ribbon Schools, “shine as bright beacons for others, putting forth an exemplary effort to ensure that every student is ready for 21st century colleges and careers.”

Opened in 2011, SJLA is San Jacinto Unified’s first magnet middle school (grades 6-8). Its mission is to educate, train and inspire students (cadets) in such a way so that each cadet becomes a recognized leader of character dedicated to the core values of honor, courage and commitment and is prepared to aggressively continue their journey toward a career of professional excellence and service to the community and country.

Under the leadership of Colonel Francis W. Sick, a 28-year U.S. Air Force veteran that retired from active duty in 2007, the magnet school has continued to receive awards and is viewed as one of the top public schools in Riverside County.  SJLA has been selected three consecutive years for the prestigious Campaign for Business and Education Excellence (CBEE) California Honor Roll.

“This special plaque means a lot to us, and represents what we believe is important for 21st century learning,” shared Colonel Sick with the student body.  “But it is only a symbol, as the real trophy is our students, not only when they are here, but also in their futures,” continued Colonel.