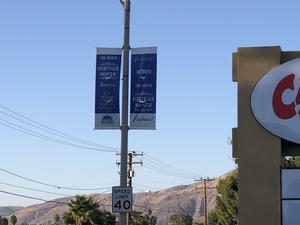 October is San Jacinto Heritage Month, as declared by SJUSD’s Board of Trustees at their regular September meeting and by proclamation by the City of San Jacinto at their Council’s meeting on October 6, 2020.

“It’s been a few years since we first started a collaborative effort with the City of San Jacinto and Soboba to share with our student families the rich history of their local community,” said John I. Norman, SJUSD’s Board of Trustees President. “So many of our schools are named after historic persons from the valley, and we want to ensure our students know why,” he noted.

It goes without saying that the COVID-19 pandemic has prevented many regular events and traditional gatherings in our San Jacinto community, however, the light pole banners to commemorate October Heritage Month were once again put on display on city streets.

“These banners depict the establishment dates for us, the City of San Jacinto and the Soboba Band of Luiseno Indians – the big three entities that have remained steadfast in this community since the 1800s,” said SJUSD Deputy Superintendent Dr. Sherry Smith.  “Seeing those banners at ‘Five Corners’ and along San Jacinto Avenue remind us that even during trying times, there can still be reflection and celebration,” she noted.

Records show that during the 1918 influenza pandemic, when the district had been in existence for just 50 years and a few months before the illness landed in Riverside County, the communities of Hemet and San Jacinto suffered a disastrous earthquake that April, with a magnitude of 6.7.

During the pandemic times and the 1918 earthquake, the namesake of SJUSD’s Edward Hyatt World Language Academy and the first Principal of San Jacinto School in 1884, Edward Hyatt was the Superintendent of California schools.  Although he had suffered a stroke in the spring of 1917, he continued in this State position until he retired in 1918.

“Our valley has seen it all -- from earthquakes and pandemics, to floods and wildfires,” explained Board President Norman.  “It's the resiliency of this community that makes it special, and we owe it to our youth to share the history of San Jacinto,” he acknowledged.

For more information about the natural and human history of San Jacinto and surrounding areas, visit the San Jacinto Museum and Association at 695 Ash Street, San Jacinto, CA 92583, temporarily closed due to COVID-19 pandemic restrictions.