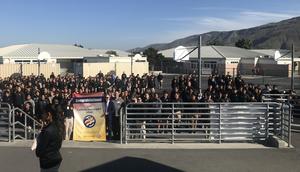 On Wednesday, May 29, 2019, California Casualty formally congratulated San Jacinto Leadership Academy (SJLA) for being named one of California’s Distinguished Schools for 2019.

The school’s staff and student body was presented with a special banner and certificate by Field Marketing Manager Chris Renn at 8:00 a.m. at their campus during morning Reveille.

San Jacinto Leadership Academy, which is a magnet school in San Jacinto Unified, is among 162 middle and high schools across California cited for achieving exceptional student performance for two consecutive years or closing the achievement gap between two years.

“This is the first time I’ve had the privilege of presenting an award banner to the same school two award years in a row,” Mr. Renn shared with the cadets.  “It attests to your school’s excellence and achievements, and something each of you should be proud of,” he continued.

In 2017, the academy earned the Gold Ribbon Schools Award for middle schools while the California Distinguished Schools program was on pause for transition to a new accountability system.  Awards are presented alternating years for elementary and middle/high schools, and awardees hold their earned title for two years.

Opened in 2011, SJLA is San Jacinto Unified’s first magnet middle school (grades 6-8). Its mission is to educate, train and inspire students (cadets) in such a way so that each cadet becomes a recognized leader of character dedicated to the core values of honor, courage and commitment and is prepared to aggressively continue their journey toward a career of professional excellence and service to the community and country.

Under the leadership of Colonel Francis W. Sick, a 28-year U.S. Air Force veteran that retired from active duty in 2007, the magnet school has continued to receive awards and is viewed as one of the top public schools in Riverside County.  SJLA has been selected four consecutive years for the prestigious Campaign for Business and Education Excellence (CBEE) California Honor Roll.