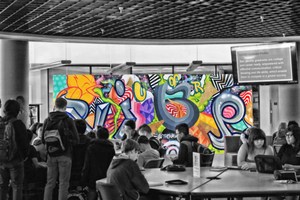 The Vibe Festival of Wellness event was initiated by University of Redlands’ Alliance for Community Transformation and Wellness (ACTW), an organization dedicated to advancing mental health care in the Inland Empire.  The traveling mural was assembled in San Jacinto High’s newly remodeled 21st Century Media Center on March 23, 2018, to be viewed by students and staff at least through April 27, 2018.

“When they first saw the mural on Monday [March 26], the students were instantly intrigued by it,” shares Stefanie Seward, SJHS’s certificated librarian overseeing the new media center.  “We love that it shows use of spray paint in an artistic way that can be done in a respectful manner towards property,” smiles Seward.

ACTW founder and University of Redlands’ School of Education Professor Janee Both Gragg wanted to share the valuable messaging in the mural, and decided it should be displayed at high schools, “where models of social emotional learning may play an influential role in students’ decision regarding their own health and wellness” states the U of R’s news release about the traveling mural titled, Refine.  Also noted on U of R’s website, Refine is a five-panel street art mural exploring the intersections between creativity, education and wellbeing.

San Jacinto High’s art teacher, Brock Essick, submitted the application to U of R’s Center for Educational Justice to have SJHS be considered as one of the viewing locations.  “I love public art and murals!” says Essick.  “I am very excited to help bring this experience to San Jacinto Unified, and especially the SJHS Art Club—we intend to feature this great work in our Fine Arts Festival on April 12,” shares Essick.

The artist, Ivan Preciado, was raised in San Bernardino and has had an interest in street arts and graffiti since early childhood.  He was one of nine artists featured in the 2015-aired eight-episode television program “Street Art Throwdown,” and although eliminated in episode 6, Preciado was requested by a finalist to return for a two-man large-scale mural that won the overall competition.  He is currently a student at the Art Institutes of California, working on his bachelor’s degree in Graphic Design and Advertising.  Preciado will visit SJHS a few times while the mural is on display, sharing his experiences and influences with SJHS students.

“It is certainly cool to have our students introduced to different types of art,” shares SJHS Principal Luke Smith.  “The display adds to an already amazing 21st Century Media Center, and is a way to further demonstrate broad diversity in our approach to education in the fine arts,” concludes Smith.