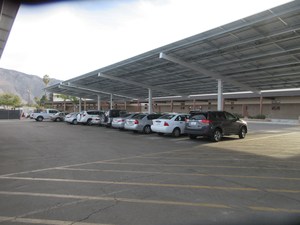 A “flip the switch” event to commemorate the completion and change to a new metering system is scheduled for May 2, 2017, at 9:00 a.m. at Mountain View High School.

San Jacinto Unified is pleased to announce the solar panel installation project, featuring carports and solar canopy structures, is now complete at all nine designated school sites. Two school sites feature battery storage. Over the lifetime of the solar Power Purchase Agreement, SJUSD is expected to save more than $9 million with the system generating 4.4 million kilowatt hours of solar energy annually from these school site installations.  A “flip the switch” event to commemorate the completion and change to a new metering system is scheduled for May 2, 2017, at 9:00 a.m. at Mountain View High School.

“Our ‘First Class Facilities’ action group, formed to focus on maintaining and improving District facilities in a high state of readiness and capacity to maximize the learning environment, was pleased to promote and monitor this project,” stated Seth Heeren, SJUSD’s Assistant Superintendent of Business Services.  “We are especially interested in the battery storage capacity installed as part of this project, both at North Mountain Middle and San Jacinto High School,” continued Heeren.

The solar and battery storage systems were built at no upfront cost to the district. The district pays for the electricity produced by the system at a fixed rate that is expected to be lower than what the utility company is currently charging.  “The use of the battery storage system during peak demand times at two of our large energy-using sites is very exciting,” stated Korey Lawson, SJUSD’s Energy Education Manager.  “We all have experienced those high rates at our homes, when the need for electricity is high,” continued Lawson, “and it will be great to realize some savings in these upcoming hotter months.”

For more information about SJUSD’s solar and battery storage systems, or details about the “flip the switch” event on May 2, contact Korey Lawson at [email protected]