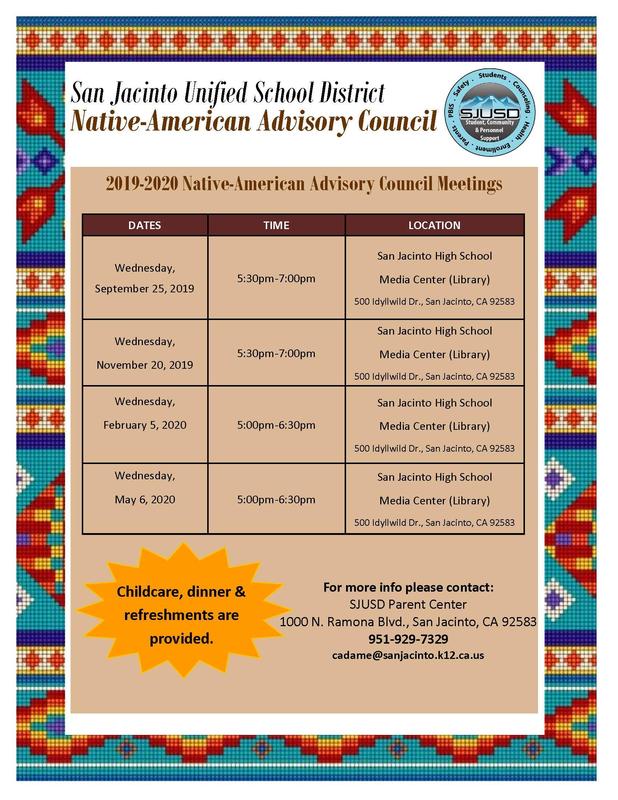 Native American Day 2019 is a federal holiday observed on the fourth Friday in September in California (September 27), dedicated to honoring and celebrating Native Americans, the Native American culture and their contributions in the past and still continue to be made. SJUSD's Native American Advisory Council will hold their first meeting this year on September 25, 5:30 p.m. at SJHS Media Center.
The district's Native American Advisory Council, with a membership of parents, staff and other community members, has a goal to Increase cultural awareness and celebration.  They will host four meetings this school year, and appropriately holding the first one just days before Native American Day!
California has been home to human beings for more than 12,000 years, with the presence of European-Americans representing only a tiny fraction of this time.  The first Europeans to arrive in California encountered hundreds of thousands of people organized into hundreds of distinct tribal groups. They had long flourished in the bountiful hills and valleys of what someday would be called California.
The contact between these first Californians and successive waves of newcomers over the next few years, was marked by the utter devastation of the native peoples, their families and entire way of life.  This cut the indigenous population by more than half.  Then the Gold Rush came, and with it, a wave of new diseases and violence reduced the Native population again, this time by more than 80 percent.  The newborn State of California actually paid for the killing of Native peoples and tolerated or encouraged policies of warfare, slavery and relocation that left no tribe intact.
In spite of these historical atrocities, California today is home to the largest population of Native Americans in the fifty states, including both the rebounding numbers of our California native tribes and others drawn to the Golden State.  The success of tribal businesses and the presence today of tribal members in all walks of life stand as proof to the resilience and powerful spirit of native peoples.
History of Native American Day
Native Americans are considered to be the first Americans to live in and populate the United States. By the time the first explorers and settlers arrived from Europe, Native Americans had populated the entire North American continent, from the Atlantic to the Pacific, and from the Gulf of Mexico all the way to the northern reaches of Canada.

In 1968, Governor Ronald Reagan signed a resolution calling for a holiday called “American Indian Day”, to be held the fourth Friday in September. In 1998, the California Assembly declared “Native American Day” as an official state holiday, observed annually on the fourth Friday in September in the state of California.
Traditions of Native American Day
Traditionally, Native American Day is viewed as a time of honor and celebration. In both California and South Dakota, some organizations and community groups support this day through learning initiatives that focus on the traditions, culture and background of Native Americans. It is a day to celebrate the heritage of Native Americans and for both native and non-native cultures to unite, in order for the many aspects of native culture to be shared. Cultural activities such as markets and gatherings of North America's indigenous people (known as pow-wows), are held and involve dancing, singing and socializing.
Here are some links that educators may find helpful for classroom instruction and/or activities:
American Indian Center
PBIS Learning Media
Smithsonian National Museum of the American Indian